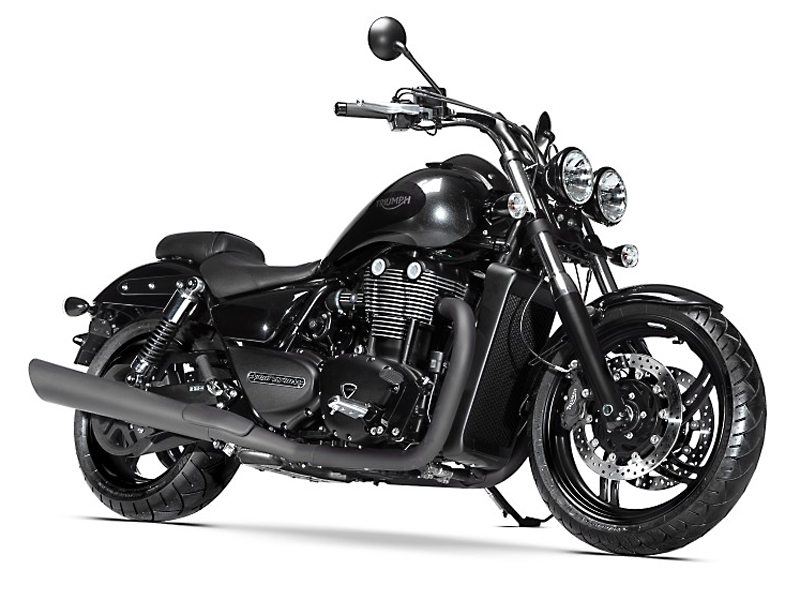 Triumph’s Thunderbird cruiser, powered by a convention-bucking parallel twin displacing 1,597cc, debuted for 2009, slotting between the Bonneville-based America and Speedmaster (both have a 865cc parallel twin) and the super-sized Rocket III (with its 2,294cc in-line triple). The Thunderbird’s accessory 1,699cc big-bore kit became standard equipment on spin-off models, including the blacked-out Thunderbird Storm, the muscle-cruiser Thunderbird Commander and touring-ready Thunderbird LT. On Jett Tuning’s dyno, our 2011 Thunderbird Storm cranked out 83 horsepower and 101 lb-ft of torque.

For 2015, Triumph is offering the Thunderbird Nightstorm Special Edition, an even darker and more menacing version of the back-in-black Storm.

The Nightstorm takes black to a new level. The custom hand painted tank features ‘ghost flames’ in a two tone combination of Phantom Black and Silver Frost that provides an incredible sparkle effect finish. The twin-skinned full exhaust system is coated with our high temperature resistant black paint, and it delivers the Thunderbird’s distinctive thumping soundtrack.

The dark character continues with black handlebars, mirrors, control plates, rear brake and gear levers. Contrasting to the black are the specially machined cam bore finishers and the striking Nightstorm emblem. The finishing touch is provided by the new nubbed design seat, which has stitched paneling and is embossed with the Triumph logo.

The centerpiece of the Thunderbird Nightstorm Special Edition is it 1,699cc parallel-twin engine, which achieves its 115 lb-ft of peak torque at just 2,950 rpm. Power delivery is smooth, refined and always controllable thanks to the twin balancer shafts and a sophisticated sequential fuel injection system. The motor’s 270 degree off-beat firing interval adds a distinctive churning character to its delivery

The 2015 Triumph Thunderbird Nightstorm Special Edition will be available beginning in spring 2015, with an MSRP of $15,499.