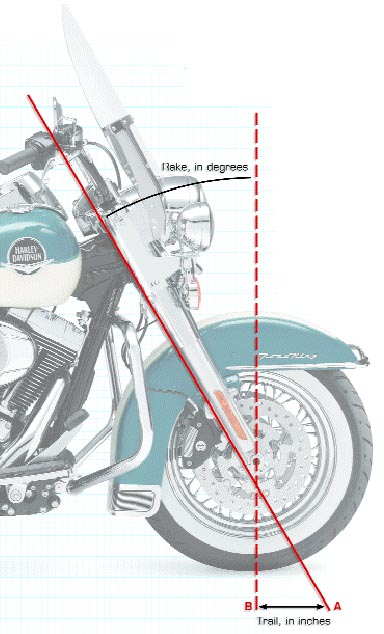 “I may be the only rider to not know this, but what is ‘trail’ about when discussing the front fork?”

Variations of this question from reader Bruno Izzo can be found, at one time or another, in every motorcycle publication. When talking about motorcycle suspension most riders understand fork rake angle, or at least believe they do, but when the term “trail” is introduced, the body of knowledge seems to get a bit vague and fuzzy. What we want to do here is clarify the vague, and shave off the fuzzy. So, what does “rake” and “trail” mean exactly?

Motorcycle suspension systems can be very complex, and involve numerous variables such as wheelbase, weight, ride height, tire size, suspension sag, and engine placement, in addition to rake and trail. This is particularly so with competition motorcycles, but these factors also come into play with standard street motorcycles, just to a lesser degree. I mention this because the subject is a multi-faceted one, and we’re just going to focus on the single aspect prompting Izzo’s question. However, to understand trail, first you need know about rake.

Rake is often called fork angle, but that is a misnomer. Rake is the angle, in degrees, that the steering head of the frame—not the forks—is tilted back from the vertical. For example, the rake angle on all the Harley-Davidson Touring models is 26 degrees. Generally speaking (meaning there are exceptions) the greater the rake angle, the more stable the motorcycle is at higher speeds. To better understand this, visualize a motorcycle with 0 degrees of rake, with the forks straight up and down, perpendicular to the ground. Ride something like that much over walking speed and you’ll be introducing your face to the ground. Now consider the other extreme; forks kicked out like those of an early ’60s chopper. These bikes were stable at speed, but required a couple of ZIP codes worth of territory in order to make a U-turn. Additionally, at low speeds it’s difficult to keep these motorcycles upright as all they want to do is flop on their side.

Understanding trail is a little less easy. Imagine aiming a laser beam down through the center of the steering head, keeping its angle parallel to the steering head. Where the laser beam hits the ground, mark as A. Now, hold your laser directly above the centerline of the front axle, keeping the beam perpendicular to the ground. Where the beam hits the ground, mark as B. Measure the distance between A and B; that is trail. On the Harley Tourers, that measurement is 6.2 inches.

Now a little bit of the “why?” To achieve stability at speed, balance, and lightness of steering effort, a compromise between rake and trail is engineered into the chassis. For example, while those wildly raked forks might give excellent high-speed stability they are impractical for normal use. To maintain good stability and proper handling with the fork angle being in the normal range (from about 22 degrees to about 32 degrees) a certain amount of trail is designed in. Generally—again, there are exceptions—the more trail a motorcycle has, the more stable it is. However, increase the trail by too much and you’re back to chopper-like handling. Conversely, too little trail and the motorcycle’s stability begins to be adversely affected.

Achieving stability, lightness, and balance is a serious engineering problem, and we have only touched on the barest of its essentials here. If you’d like to know more about this subject (and you’re up on your trigonometry skills) you couldn’t do better than to pick up a copy of “Motorcycle Handling and Chassis Design: The Art and Science” by Tony Foale. This is the bible on the subject. A Google search will tell you how to find it.

And thanks for the question, Bruno. Hopefully we’ve shed a little light on the subject.

[This article was originally published in American Rider magazine]