Hot on the heels of its summer introductions of three new 2015 models—the CBR300R, CB300F and NM4—Honda has announced the return of several cruiser, touring and dual-sport models. The 2015 model year marks the 40th anniversary of the Gold Wing, and Honda is celebrating with a commemorative 40th Anniversary Edition as well as unique 40th Anniversary emblems on all 2015 Gold Wing models.

“For 2015 we are proud to be celebrating 40 years of the Gold Wing. This model means so much to our company and our customers,” said Lee Edmunds, Manager of Motorcycle Marketing Communications at American Honda. “When this model was introduced in 1975 it revolutionized what touring in America could be. It was our customers’ passion for adventure and traveling the open road that really defined the Gold Wing and how it is used today.” 2015 Honda Gold Wing
The 2015 Gold Wing is offered in a striking two-tone Candy Red and Black color marked with unique adornments as a special 40th anniversary edition, as well as a new Silver Metallic color and Black. Honda’s flagship tourer is a luxurious, powerful, balanced and fully featured machine. Its six-cylinder 1,832cc engine churns out smooth, generous power. The Gold Wing is available in four distinct performance package options, so customers can choose the features they want. Prices start at $23,999, and bikes will be available at Honda dealers in October 2014.
powersports.honda.com/2015/gold-wing.aspx 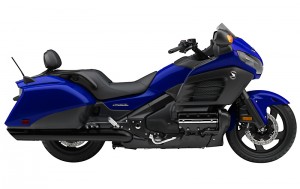 2015 Honda Gold Wing F6B
F6B stands for “Flat-Six Bagger,” and this Gold Wing variant dispenses with the top trunk and offers bagger styling that’s popular today. The bike is lighter than the standard Gold Wing and has a lower windscreen and more streamlined bodywork. For 2015, the F6B makes logging miles easier with the addition of cruise control and offers more aggressive styling with a new black exhaust. The Gold Wing F6B is available in two new colors—Matte Silver and Blue Metallic—and will be in dealerships in November 2014; price is TBD.
powersports.honda.com/2015/gold-wing-f6b.aspx 2015 Honda Interstate
The Interstate is Honda’s long-haul custom that pairs modern features with classic retro styling. The Honda Interstate delivers ample power and strong low- and mid-range torque from its liquid-cooled 1,312cc V-twin while its floorboards, saddlebags and pronounced windscreen provide the luxury, comfort and capability for long-distance journeys. It returns for 2015 unchanged except for a new color: Black with a black frame, silver wheels and chrome accents. Available in November 2014; price is TBD.
powersports.honda.com/2015/interstate.aspx 2015 Honda Fury
The Fury is Honda’s most distinctive and radical cruiser, delivering the look, style and ride of a custom chopper with the reliability that Hondas are known for. Like the Interstate and Stateline, it is powered by a liquid-cooled, fuel-injected 1,312cc V-twin that’s tuned for torque, with a 5-speed engine and shaft final drive. For 2015, the Fury gets new frame, wheel and accent treatments, and it comes in Candy Red or Black with a gray frame and new bronze-colored wheels. Available in November 2014; price is TBD.
powersports.honda.com/2015/fury.aspx 2015 Honda Stateline
The Stateline is the modern custom in Honda’s 1300 Custom line, with a long and low stance that blends style with attitude. The blacked-out cylinder fins on the 1,312cc V-twin engine, swept bars, noticeably raked-out fork and wider, full fenders and tires create an undeniably cool cruiser aesthetic. New for 2015 is a Blue Metallic color with a black frame, silver wheels and chrome accents. Available in November 2014; price is TBD.
powersports.honda.com/2015/stateline.aspx 2015 Honda Shadow Aero
Honda’s long-running Shadow line has for many years been represented by middleweights, cruisers powered by a liquid-cooled, fuel-injected 745cc V-twin with shaft final drive—a bulletproof drivetrain. The Shadow Aero is the retro-cruiser of the family, with spoked wheels, full fenders and a chrome 2-into-2 exhaust. For 2015, the Shadow Aero comes in a new Candy Red color. Available in November 2014; price is TBD.
powersports.honda.com/2015/shadow-aero.aspx 2015 Honda XR650L
The time-tested XR650L remains Honda’s do-it-all dual-sport model that’s capable of just about anything. From backcountry trail rides to urban commuting, its fuel-efficient 644cc air-cooled single and long-travel suspension will get the job done. Available in Red in December 2014; price is TBD.
powersports.honda.com/2015/xr650l/offroad.aspx