story and photography by Clement Salvadori

Following World War II, Harley was on a roll. The Knucklehead’s OHV motor, in either 61- or 74-inch guise, put the big twins well in front of the flathead Indians. And then the Milwaukee skunk-works came up with the hydraulically adjusted valves on the Panhead in 1948. But the chassis was still a bit retro, with a hardtail frame and girder fork.

That changed in 1949, when the first Hydra-Glide appeared—with a hydraulic telescoping fork. In truth, the factory had come up with the design right after the war, but the economics of using up the extant supply of girder forks, and developing a production line for the new ones kept the girders in business until 1949. Rumor was that The Company had wanted to include the new fork with the new engine in ’48, to give the consumer a big double-whammy of newness, but cooler heads decided to take this a step at a time. Telescoping forks had been around since the late 1930s, were obviously the “coming thing,” and Harley did not want to be left too far behind. They were quite simple, really, with long helical springs located in the fork tubes, more than 5 inches of travel, using a high-viscosity synthetic oil for damping and added cushioning effect. As one road-tester put it in August of 1949, the new fork had made the Big Twin into “a marvelous road motor.” A self-styled humorist noted that the look of the massive fork was that of a couple of beer cans.

The rigid frame had a saddle, solo or optional two-up, which did supply a decent measure of comfort for the rider. The front of the saddle hinged on the frame, with the main support coming from a post going down into a frame tube—which had springs at the bottom that could be arranged to suit the weight of the rider(s). With the Deluxe Buddy Seat came a secondary spring support from a bracket with two springs that attached to the frame and could be raised and attached to the aft end of the saddle—very useful when the passenger was a bit on the weighty side.

The bike in the photos is an FL model, meaning it had the big 74-inch overhead-valve motor. The original OHV engine, the E dating from 1936, was a 61 incher, 998cc to be precise, with a 32mm Linkert carb. But for the 1941 model year the unit was bored and stroked to 74 inches (1,208cc), fueled through a 33mm Linkert. This was the F, the single letter meaning low compression engine, with the L indicating a middling compression. Americans, with large spaces and long distances, loved the big, low-revving engines.

The engineers decided that the Knucklehead engine’s life could be improved and extended if the factory took care of valve adjustments—with hydraulic valve lifters, as the automobile world was using. The Knuckleheads had a lot of external plumbing, which resulted in leaks that could easily mess up the rider’s trousers. New aluminum-alloy cylinder heads were developed, with all the oil lines inside, and these were bolted on the Knuck’s cast-iron cylinders and bottom end. The new heads had a cover that looked rather like a cake pan, hence the Panhead nickname. In 1948 the hydraulics were up in the head between the top of the pushrods and the rockers arms, with oil pressure serving to keep the gap at the proper clearance; this also reduced the noisy valve clatter so noticeable in the Knuckleheads. However, since the oil had to be sent all the way up to the heads to do the work, there were quite a few failures, and then the engine would be dead quiet as a result—since it would stop working. After four years the system was redesigned, with the hydraulics being moved to the bottom of the valve train, using hydraulic tappets and rollers between the cam lobes and the pushrods…much more efficient.

Originally this ’49 Pan was bolted into a “wishbone” frame, a sturdy double-cradle hardtail, made from ’48 to ’53; nobody knows what happened to the original frame, but the 74 now sits in a “straight leg” frame, in effect a modified “wishbone,” used from ’54 to ’57. Mounting points on the downtubes allowed for the easy bolting on of a one-piece crashbar—useful in parking lot tip-overs, not so good when moving along at 60 mph. Rubber-mounted handlebars were the order of the day. The standard 5.00 x 16 wheels were kept, but a new, larger front brake was incorporated, mounted on the left side of the wheel. This FL has an optional chrome hub-cap balancing out the big brake drum on the right side of the wheel. Americans loved the curvaceous design, reminiscent of the World War II pin-ups like Betty Grable. Curving fenders, curving exhaust system, curving gas tank, curving valve covers—there was hardly a straight line to be found apart from the frame.

In ’49 Harley was still using the tank shifter with foot clutch, and four speeds for the solo rider. If a sidecar were attached, there was an optional three-speed with reverse.

This particular ’49 FL has a whole slew of options bolted on, from chromed bumpers to chromed oil tank. Since oil had increased importance beyond mere lubrication in the Panhead, an “oil filter assembly” was available for $6, seen here on the right side of the rear cylinder.

The filter became standard equipment in 1953. In ’49 the buyer would have had to settle for the old-fashioned leather bags, while the plastic saddlebags seen here were a later addition. Plastic was the “in” thing in the ’50s, and when they appeared on the list of “supplementary equipment items” in 1954, at a nominal $41.50 including a chromed luggage rack, they were a popular purchase. The little lights fore and aft aren’t turn signals, but parking lights. The windscreen is a new item, from National Cycle, and looks much like the old Harley option. 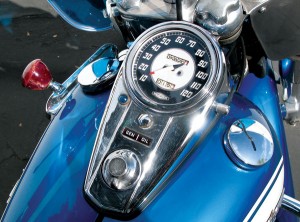 For 1951 the low-compression E and F models were dropped, leaving the EL and FL. The 61-inch model was losing favor, as the price difference with the 74-inch in 1952 was a mere $15, $955 vs. $970. In ’53 the EL was dropped from the line. And in ’55 the FLH (H for Hot) was added to the regular FL; the FL was rated at 50 horsepower, while the FLH had higher compression and 55 horses. Since these were kickstart days, having a more powerful engine could mean more of a challenge when starting. Not so curiously that year, ’55, the crankshaft dating from 1936 was improved, using newly de­signed tapered roller bearings. Top speed, stripped and with the muffler removed, was 110 mph, as recorded by Don Brown at Cycle magazine. Not bad.

And then in 1958 the Hydra-Glide got suspension on the rear end and became the Duo Glide. Progress, ain’t it wonderful?!