Home Features Adventures in Paradise: Touring in the Dominican Republic

Life in the USA has become so sanitized, homogenized, standardized and over-regulated that I often feel I was born too late. Especially so if I’ve been reading the historical adventures of James Cook, Lewis and Clark, or Teddy Roosevelt. It was time to take a trip through undiscovered country. So the motto for MotoCaribe Motorcycle Tours in the Dominican Republic—“Adventures in Paradise”—filled the bill nicely. Not just another tour, but a real adventure? Sounds great.

In discussing the North Coast Tour with MotoCaribe founder and tour leader Robert Cooper, I mentioned I knew practically nothing about the Caribbean. So he roped me into doing something I never do: skip all research prior to the trip. That way, I could arrive as a blank slate, so to speak. And that, in turn, would give you readers a full, unvarnished first look at life aboard two wheels in the Dominican Republic.

So, my first impression of the DR: a land of contrasts. Landing in Santiago, the country’s second-largest city, I saw a contemporary city steeped in old-world tradition—it was founded in 1495, after all. Centuries later, it’s filled with a wealth of modern amenities, especially if you use American fast-food joints as a yardstick. Upon leaving the city proper, the outskirts immediately turn green with tropical growth, and economic prosperity is dialed down. Indeed, many of the places we visited in the boonies were downright dirt-poor, a socio-economic contrast to the incredibly gorgeous, luxurious, tropical scenery and spectacular shorelines filling the countryside. These exotic surroundings added immensely to the adventure quotient, a sensation of stepping back in time to a simpler era. Before departure, many of my friends and family questioned why I would plan a motorcycling trip to the DR. “Won’t it be dangerous?” they asked. Short answer: not at all. Even on the most remote roads leading to jaw dropping isolated views and hidden wonders, we never once felt threatened or worried. We found locals to be a bit shy initially, but usually they quickly warmed up to our arrival at a store or gas station, intent on talking bikes with us. Motorcycles: the great equalizer in the DR.

Understand that the DR as a whole is a motorcycling community. Of the 2.5 million registered vehicles in the entire country, 1.8 million are “motos,” or small bikes with engines displacing 150cc or less; many displace only 50cc or 70cc. That means just about everywhere you go, these little motos are buzzing about at full chat. Moreover, while riding about I see that a large percentage of motos bear no license plate at all. So who knows how many of these little buzz bombs are really running around! And that creates some challenges.

Robert had a simple way of informing our group of seven riders about local road conditions: expect chaos. At least that was the way it would appear initially. Traffic laws, lane markers, stop signs, etc. serve only as vague suggestions in the DR, with enforcement practically nonexistent. So set aside all preconceived notions about rules of the road. But give it time, he said, and patterns and practices develop into a clear picture. Yes, there will be these little motos riding in both directions on both shoulders of the road plus the center on two-lane roads (yowza!). Sometimes they may dart across the road, but most of the time the traffic flow remains consistent. And be sure to watch the road for dirt, water, mud, dogs, potholes, speed bumps and missing manhole covers (whew!). Yet, incredibly, a picture of organized chaos soon does emerge.

Usually, my preferred form of riding is very sport-oriented; I like to focus on that one piece of road dead ahead as man and machine meld into a single entity to attack the twisties. In the DR, that didn’t happen much. Instead, I was busy scanning everything within a field of 180 degrees like a quarterback being pressured; motion everywhere, where is the blitz coming from, do I charge ahead or hold back in the pocket? Or maybe the riding was like playing a game of dodge ball: keep scanning the field and move about so you don’t get tagged. Compelled to back the pace down a couple notches, to my surprise I found the ride incredibly fascinating, simply because there’s so much to see in this truly exotic environment. Adventures indeed!

On our first riding day, we headed from Jarabacoa to a deserted spot where we then hiked to a fabulous waterfall, Salto de Jimenoa. On the way we passed a hydroelectric plant clinging to a steep hillside above the roaring river. Robert’s wife Alida told us that in the 1970s, the site was so inaccessible that mules had carried every bit of concrete and machinery used in that plant! This set the stage for what MotoCaribe is all about: enjoying many of the hidden treasures of the Dominican Republic that typical tourists could never find on their own, all while using motorcycles as the vehicle of access. 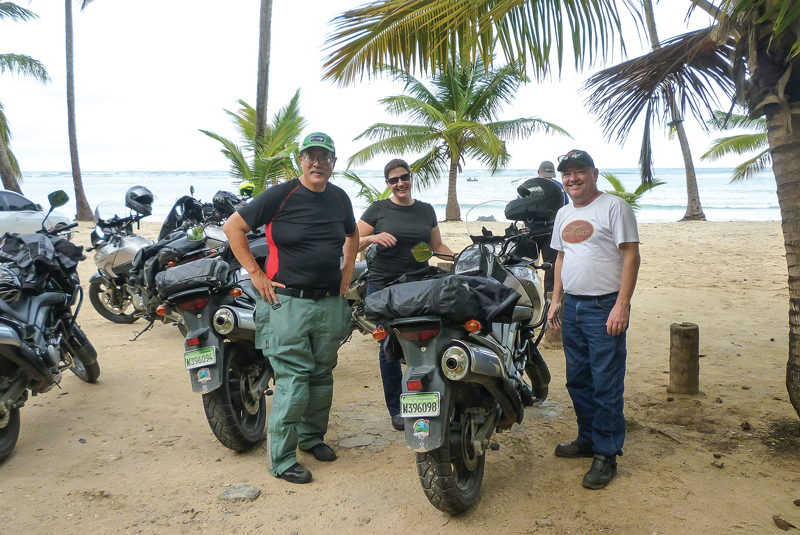 The next day we had a curveball: bridge out! Record 40-year rains washed out a key bridge on our intended mountainous route on Highway 233, so we lost access to some great twisty roads. We would instead take Highway 132 through plains holding rice fields. Robert apologized profusely for this flatland substitution, but all in our party understood that the weather always has its own way. And the sights of everyday life along our improvised route proved captivating.

At one point, the traffic slowed drastically. I peered ahead and saw we’d encountered a long string of slow vehicles. We passed several cars filled with somber people dressed up in their Sunday best, and then I realized it must be a funeral procession. At the front was a pickup truck carrying the casket and six pallbearers—all riding together in the bed of the truck. It’s an entirely foreign custom, but common humanity spans the gulf. I lifted the front of my helmet to reveal my somber face, locked gazes with two of the guys, nodded and gave a salute of respect. They nodded and gave a small wave of thanks in return. Respects paid to an unknown friend…

At Nagua, we hooked a right onto Highway 5, passed though the picturesque seaside town of Samaná with its fleet of whale-watching boats, and rode on to land’s end at Grand Paradise Samaná, an all-inclusive beach resort outside of the resort town of Las Galeras. It’s a fabulous hotel with a gorgeous private beach, but we spent our time searching out even more pristine spots. The next morning we rode to a deserted dirt road, riding past an underground marble quarry burrowing into a mountainside to visit a natural cave, viewed a delightful little ocean side cove, and also saw a blowhole on a cliff overlooking the Atlantic. Due to low tides, the blowhole wasn’t blowing water, but a forceful rush of air was shooting upward. We were the only visitors on site, but there was one enterprising fellow selling fresh coconuts he lopped open: nature’s handy thirst quencher. We then rode to a spot where Robert and Alida arranged for us to ride horses to a crazy-cool tropical waterfall.

The next day dawned cooler, perfect for our beach day at Playa Rincón. We rode together in the MotoCaribe van because we encountered a flooded road that looked like the Disneyland Jungle Cruise. The water was deep, nasty and stagnant—definitely better that we were in the van rather than on bikes. Although I’ve never been to Tahiti, we arrived at a beach setting that looked like it could be a dead ringer for that Pacific paradise. There we had great snorkeling and miles of pristine white sand beach almost all to ourselves, and enjoyed a BBQ lobster and chicken lunch on the beach at open-air tables sheltered by a palm-frond structure—my favorite meal of the trip! Riding gear in the tropics can be a bit of a puzzler. We had very hot and very humid weather that saw many in our group wearing mesh jackets and riding jeans. When the rain showers came, we sometimes just kept riding without switching to rain gear; the warm temps made the rain feel refreshing! But our route back to Jarabacoa found us grinding out hours of riding through pouring rain that flooded many roads. I kept my Tour Master Draft 3 mesh jacket on for protection, adding the Sentinel rain jacket on top—a fine combo. My Aerostich DarienLight pants, which had been good if a bit too warm on sunny days, worked perfectly in the rain. Back in Jarabacoa, our final day of riding on a mountain loop got cancelled due to rainy weather that threatened to dump 4 or 5 inches—too dangerous with the potential for landslides. So we were instead treated to a day in Santiago, visiting the Central León Museum and enjoying a leisurely lunch. These activities, like all the others during the trip, were included in the $2,395 cost of the tour, making this 8-day North Coast Tour a genuine bargain. Unlike most tour companies, MotoCaribe even covers fuel along with lodging and all three meals. They also bring snacks and beverages along in the chase van, so only end-of-the-day cocktails are on your own nickel. The provided Suzuki V-Strom 650s are plenty of bike for the DR; anything bigger would really be too much for the little roads we traveled most of the time.

At trip’s end, my six fellow travelers and I were thoroughly satisfied with the tour. We all understood that unusually heavy rains had cut out some of the best riding on this itinerary, but nobody felt slighted and each felt that this had been a genuine adventure indeed. In fact, it only made us want to return again soon for more adventures.

MotoCaribe offers several different tours in the Dominican Republic that run November through May, as well as custom and club tours. For more information visit motocaribe.com.