This was the bike that got a lot of Americans excited about the Norton marque. Brit bikes were relatively rare in the U.S. in the early 1950s, with mainly Triumph and BSA battling it out. Yanks had long read about Norton’s racing successes, like when a 500 Manx came in second at Daytona in 1949, but were not much interested in the single-cylinder Internationals, civilianized versions of the racing Manx. What they wanted was an easy to start twin, with enough zip to run up to the semi-magical 100 mph mark. The 500cc Dominator 88 did not quite have the punch needed, but when it was bored and stroked to 600cc (actually 597cc), that stoked some serious interest.

Some people, both industry and consumers, were a little surprised that Norton had not gone to the popular 650 size, which Triumph had done in 1950 with the Thunderbird, and BSA a year later with the Golden Flash. Nortons began to be imported in 1949, and had six U.S. distributors. After the arrival of the 99 the distributors apparently got together and jointly bought the first full-page ad seen in the bike magazines–in the November ’66 “Cycle.” After a very complimentary road test in the September issue. Norton was an old company, with James Lansdowne Norton founding the Norton Manufacturing Company at the age of 29, back in 1898, when it started manufacturing chains for the burgeoning bicycle market. But motorized bicycles were the coming thing, and JLN got right on it. His 690cc Peugeot-powered V-twin, a touring model, won the Isle of Man Tourist Trophy in 1907; success was clearly in the stars. Norton began building its own engines and prospered.

Late in 1945, after WWII, Norton went back to building civilian motorcycles, both a side valve and an OHV 500 single, along with a very few OHC 350 and 500 Internationals. Triumph was hitting the advertising pages big time, promoting its sleek T100 Tiger 500cc twin, and that was getting a lot of attention. So Norton did the logical thing and hired a designer named Bert Hopwood, who had worked at Triumph before the war when the T100 first came to light. He joined Norton in 1947, improved the singles, and then worked on developing a parallel twin. In November of 1948 the Dominator Model 7 showed up at the annual Earl’s Court motorcycle show, with a vertical twin engine mounted in a Norton frame with a telescopic fork and a plunger rear suspension. Unfortunately, at 440 pounds it was 75 pounds heavier than the Triumph. In 1949 Hopwood moved on to the BSA company, assigned to the task of making BSA’s 500 twin into a 650. Norton went to work bringing the Dominator 7’s weight down, and the big innovation was the advent of the Featherbed frame, originally intended for the racing Manxes. Previous frames had been complicated and heavy, whereas the Featherbed was essentially two one-piece loops that was both lighter and stronger, using expensive Reynolds 531 manganese-molybdenum, mild-carbon steel tubing. Since everything passes through the steering head, the backbone tubes were welded to the bottom of the head, while the downtubes actually ran between the backbone tubes and then welded to the top of the head. All suitably braced.

Norton then went about making a roadster edition of the frame, using less expensive steel. Initially the saddle-supporting rear section was bolted on, but soon was welded, as that was a lighter approach. Norton also saw fit to give the frame its own name, plus a secondary description, which began with Wideline, and then Slimline (1960), referring to the width of the frame beneath the forward part of the saddle. The 99 used an oil-damped Roadholder fork and a swingarm rear end with a pair of Girling shock absorbers. When the 500 Domi 7 twin got the Featherbed, the bike received new numeration: Domi 88. Nothing exceptional about the dry-sump engine. The crankcase was split vertically, the cylinders were iron, the head aluminum alloy. The camshaft was up at the front of the engine with four light-alloy pushrods operating the four valves. A single Amal Monobloc fed the fuel to the combustion chamber, having a modest compression ratio of 7.6:1.

A single-row primary chain ran in an oil bath from the crank to clutch, which had little rubber shock absorbers. This was all done inside a sheet-metal primary case. And if the cork gasket was in good shape, the oil stayed inside. The four-speed transmission was made by Norton, and in best British tradition, the shift was on the right side, up for first. 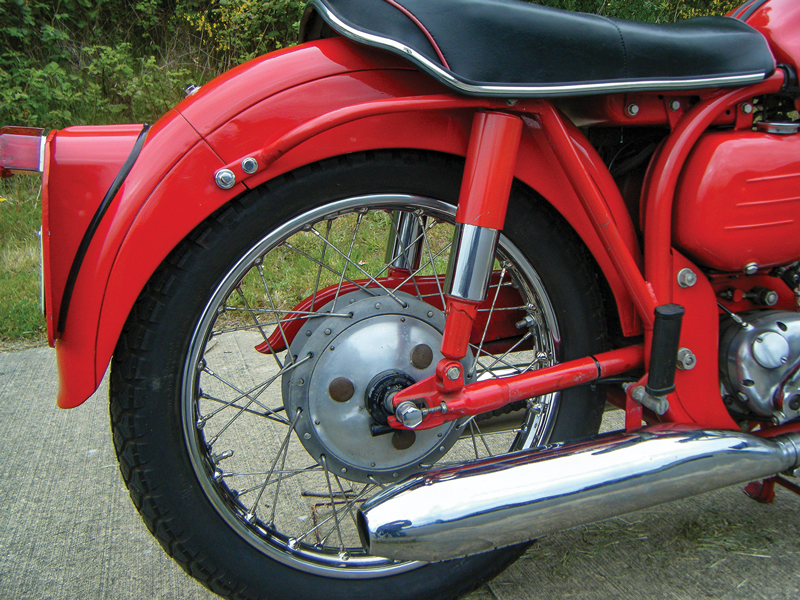 The bike weighed some 410 pounds wet, and put out 31 horsepower. It had a comfortable seat, slightly Americanized handlebars and a 4.4-gallon tank–test write-ups said the 99 got more than 50 mpg. The headlight shell held a speedometer, ammeter and light switch. Initially a Lucas magneto sparked the plugs and a dynamo lit the seven-inch headlight, but in 1958 a crankshaft-driven alternator and distributor did both tasks. Petcock on, choke if cold, tickle the carb, fold out the starter and a healthy kick or two would get the engine going.

That “Cycle” road test reported a top speed of 114 mph–impressive. And a quarter-mile time of 14.61 seconds. Equally impressive.