Remember when a 750 was one of the big boys, a hefty handful that you had to work up to? These days 1,600cc is the new 750. In my line of work, I push a lot of bikes in and out of the garage, and make endless U-turns on steep, narrow roads during photo shoots. When curb weight approaches half a ton and displacement exceeds that of a small car, it can all get downright strenuous.

Throwing a leg over the 2010 Honda Shadow RS brings a smile to my face, and a sigh of relief. Ah…simpler times! This is a solid, basic motorcycle that leaves nothing to the imagination; what you see is what you get.

The first Honda Shadows—the VT500C and VT750C—motored onto the scene in 1983, back when sub-liter engines were the bread and butter of the metric cruiser market. The Shadow family tree has had a lot of branches, with cruisers ranging from 125cc to 1,100cc and variants bearing names such as American Classic Edition, Aero, Spirit and—a bit redundantly—the Shadow Phantom (a specter’s specter?). And that tree has produced lots of leaves: in the 700-800cc category alone, Honda has sold more than 250,000 Shadows to some of the nicest people in America.

The RS and Phantom, both introduced for 2010, are the newest members of the Shadow 750 family. A classic sibling rivalry, the RS is the taller, clean-cut do-gooder to the Phantom’s dark, brooding rebel (see Rider, June 2010). The classic roadster styling of the RS—spoked wheels, straight-shot exhausts, minimalist front fender—bears a striking similarity to the Harley-Davidson 883 Sportster. In fact, the Japanese interpretation of an American icon was designed for Honda’s home market. But when American Honda executives caught a glimpse of it, they said, “We gotta have that!”

Beating at the heart of the Shadow RS is a liquid-cooled, SOHC, 52-degree, 745cc V-twin with three valves per cylinder and an offset dual-pin crankshaft to minimize vibration. The RS and Phantom are the first bikes in the Shadow 750 line to get fuel injection—Honda’s tried-and-true PGM-FI—and both have crisp, precise throttle response. Delivering a lively rumble and lope, the engine runs smoothly from idle through midrange but be­comes unpleasant in the upper registers. Short-shifting and moderate revs are the key to happiness. On Jett Tuning’s Dynojet dyno, the Shadow RS posted peak figures of 38.6 horsepower at 5,300 rpm and 42.8 lb-ft of torque at 3,600 rpm. For a bike that weighs only 507 pounds wet and will be ridden mostly solo at boulevard speeds, that’s all you need. Unlike the other Shadow 750s, the RS gets chain final drive rather than shaft; less weight, more maintenance.

Feet-forward cruisers force me to compromise the good posture my mama worked so hard to instill in me, with hunched-over seating positions that require the discs between my vertebrae to pick up where short-travel suspension leaves off. Pleasantly, the Shadow RS has a fairly standard riding position that fits my 6-foot-plus frame better than expected. Perched 29.4 inches off the pavement, you sit on the RS rather than down in it (as with the Phantom’s 25.7-inch seat height). The footpegs are higher and farther back than on most cruisers, allowing above-average cornering clearance. Thanks to a comfortable bend to my knees, a natural reach to the grips and a fairly straight back, all-day riding is not a crippling affair. On the other hand, the seat induces butt burn after an hour and the pillion pad is little more than a pot holder. But on this bike, it’s about the journey, not the destination. Stop, rest, take in the view. Savor a cup of coffee and gab at the gas station, a place you’ll visit often. The RS averaged 43.8 mpg on this test; with a waifish 2.6-gallon tank, the RS’s low-fuel light came on at the 100-mile mark like clockwork.

Cruising down Main Street through downtown San Buenaventura on the Shadow RS elicited second glances and the occasional nod. Its mildly syncopated exhaust offended no one. Pedestrians and pet owners admired its lines and chrome accents, never the wiser that most of the RS’s bodywork—fenders, side covers, “chrome” on the engine—is made of plastic. Some scoff at anything that isn’t real steel, but I don’t mind plastic. Not only does it keep food fresh in my fridge, it’s lightweight and won’t corrode, rust or dent. The shiny exhaust pipes are the real deal, and the billet aluminum triple clamp is spiff. And there’s metal where you need it: the bulletproof frame and motor. The Shadow RS feels as reassuring and dependable as the sunrise.

Putting around town is all well and good, but my Type A personality and caffeine intake demand that I ride every test bike hard and fast for at least a couple of tankfuls. On my BFF backroads, the Shadow RS was eminently capable. It blends conservative steering geometry (32-degree rake, 5.3-inch trail) with a fairly short 61.5-inch wheelbase and narrow tires. Axle to axle, the RS is 3 inches shorter than other Shadow 750s and only 0.8-inch longer than Honda’s sporty VFR1200F. The tube-type Dunlop D404s provided good grip and predictable steering. Shifting the wide-ratio, five-speed gearbox was effortless, clutch engagement perfect. The brakes and suspension, clearly an area where Honda sought to limit costs, are unremarkable yet they fulfilled their responsibilities honorably. The single front disc and rear drum are well suited to a bike like the Shadow RS, which maxed out at an indicated 80 mph with my helmet on the tank and the throttle pinned. With suspension travel limited to 4.6 inches front, 3.5 inches rear and only rear preload adjustability, the ride was harsh at times over rough pavement. But the bike never wavered from my chosen line, and this is, after all, a minimalist cruiser.

Amenities are nil. There is no tachometer, and the LCD display set in the bottom of the large analog speedometer offers basic functions only: odometer, A/B tripmeter and clock. And there is no storage space to speak of. Behind the left side cover you’ll find an owner’s manual, and behind the right one you’ll find a toolkit with one hex wrench and one Philips screwdriver. Heck, even color options are slim and understated: Pearl White or Metallic Gray. Gotta have accoutrements? Ask your dealer to bolt on some Genuine Accessories, such as a backrest, rear rack, saddlebags, handlebar bag and trim pieces.

You really can’t go wrong with a bike like the Honda Shadow RS. Its only real drawback is the price. This is a bike which had much of its tooling paid for back in the go-go ’90s, yet it sells for $7,799. A Harley-Davidson Sportster 883 Low, of which the RS is a spitting image, starts at $6,999. And you get low-maintenance belt drive, a rear disc brake and automatic inclusion in The Family. But American-made heritage isn’t for everyone, and many feel Hondas are worth a premium. Honda Shadows will be roaming the earth long after we’re fodder for the next round of fossil fuels. And I’m sure the stylish, sporty RS will be highly coveted among riders in that Brave New World. 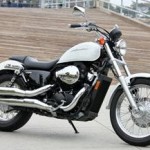