Riding the 892-pound Kawasaki Voyager around town is a little like taking a Carnival Cruise ship across a pond. Once on the open road, though, the big touring cruiser transforms into a comfy companion, with 10 gallons’ worth of lockable packing space in each saddlebag and a top trunk that will hold two full-face helmets. I recently tested the Voyager’s long-distance prowess on a springtime 235-mile blast along two-lane Highway 395 to Lone Pine, California, with two other riders on Voyagers. We spent two days exploring the surrounding area and Death Valley aboard our steeds. This ride brought back fond memories since my very first long motorcycle ride—a four-day, 2,000-plus-mile tour—was as a passenger aboard a 1983 ZN1300 Voyager (coincidentally our Retrospective subject in this same issue).

The liquid-cooled, 52-degree V-twin Vulcan Voyager was introduced last year (see 2009 Kawasaki Vulcan Voyager 1700 road test) when Kawasaki replaced its 1,500cc and 1,600cc shaft-drive Vulcans with the 1,700cc belt-drive line. It features EFI and four valves per cylinder. Kawasaki says that for 2010 less engine heat reaches the rider thanks to improved heat management, but we still felt some heat on both legs at times, especially on warm days.

Highway 395 is a long stretch of arrow-straight road that can get monotonous, but this comfy luxo-tourer with a windscreen that keeps the elements off the rider and a plush seat with good lower back support helped keep me happy. I let my thumbs do the walking on the Voyager—with cruise control and toggling between the CB/iPod/radio/volume—and the time flew by. You can hear a lot of road noise behind that tall ’screen that has us (up to 6-foot, 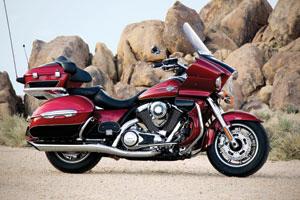 1-inch) looking through it. The 45mm fork with 5.5 inches travel and dual shocks with 3.1 inches travel are compliant on the highway and soak up everything except big potholes quite well. Airflow to your legs when it’s warm is supplied by closeable vents in the lowers, there are floorboards for both rider and passenger, and the passenger’s seat is plush with a supportive backrest.

When you get to the twisties, be prepared to slow the pace, since the Voyager’s floorboards scrape early and the bike wallows a bit at high speed in long sweepers. Nevertheless, the Voyager feels lighter than it looks, the handlebar offers good leverage for pushing through corners and the bike steers pretty darn well for its heft. The six-speed with overdrive transmission clunks into gear, but finding neutral is easy at a stop. Our K-ACT ABS-equipped ($1,100 option) bike with dual front discs and four-piston calipers and a single disc out back with twin-piston caliper stops very strongly and efficiently.

The Voyager’s looks are sort of an oxymoron: The frame-mounted fairing is curvy and gives the bike a massive, bulbous look, yet once you’re in the rider’s seat, the rider triangle is more compact than expected. The cockpit is way cool with its retro-looking classic car analog gauges, yet there’s a modern LCD display smack in the center. The functional fairing houses speakers for the radio (optional iPod and CB, intercom/headset compatible) and two lockable storage compartments. Take care when parking the bike tail first because the mufflers are low enough to graze curbs. In our road test we put more than 2,500 miles on our Voyager and it averaged 36.4 mpg.

If you spend a lot of time in the canyons and corners, the Voyager won’t exactly reward your choice of motorcycle. But if you’re looking for a traditional V-twin with good long-distance comfort, the Voyager could be your next bike.

For more information on the Kawasaki Vulcan 1700 Voyager visit kawaski.com